Meet our guide to spice drawer synergy – essentials only, for an organized kitchen and adaptable palette.

Often used in sweet dishes and 2020 baking projects, Cardamom has a distinct, pungent flavor that will be missed if left out. It’s cultivated in Southern India and Southeast Asia and can be found in pod or ground form - either works fine! But as a general rule, whole spices are preferred for maximal flavor.

One of the first spices humans ever used for cooking, cloves are used in a variety of cuisines around the world. Its flavor lends itself to sweet desserts, savory protein dishes, and warm spiced beverages alike. You’ll often see cloves paired with nutmeg or cinnamon to enhance flavor and dull the bitterness.

You might think you know this spice, but it goes way beyond cinnamon toast crunch and Alison Roman’s cinnamon scrolls. There are actually 4 different varieties of cinnamon, each one with a different origin, chemical makeup, and flavor. Indonesian Cassia is what you probably know as cinnamon, but there's also Chinese and Saigon varieties. Ceylon is almost entirely different, cultivated in Sri Lanka and sometimes referred to as the “true cinnamon.” It’s milder and more delicate in flavor, with a much higher price tag.

Flavor Notes: rich, warm, and (you guessed it!) nutty

Contrary to its name, nutmeg is actually an aromatic seed hailing from Indonesia. You’re probably familiar with its taste from pumpkin pie or basically anything you’d make in the fall, but did you know it’s an essential in Caribbean cuisines and often used in savory dishes. Jerk chicken anyone?

You might know it as the spice that dyes all your food containers yellow (click here for food containers that don’t stain- shameless plug!) or that funk slurped up at the bottom of your brightly colored latte. Turmeric is touted for its health benefits, but other than star golden mlyk ingredient, what do you use it for? Well, any curries, stews, or rice dishes to name a few.

Coriander, also known as cilantro, is the name given to the seeds of the plant - aka the whole or ground spice in your cupboard. Brines, spice rubs, and stews are good friends of coriander, and you’ll often find it in Indian, Mexican, and Latin American cuisines.

A close cousin of parsley, cumin is an essential in Mexican and South American cuisines, although it originated in Egypt and the Middle East. In addition to tasting delicious, these little guys tout quite the health benefits; high levels of fatty acids, dietary fiber, and vitamin E. They’re often chewed after meals in India for digestion aid.

Saffron is the Rolls Royce of spices. It sells for a whopping $7 per gram. Why is it so expensive? For starters, it’s almost exclusively (85%) cultivated in Iran. But Spain and Morocco both produce their own varieties. Unsurprisingly, Saffron is often used in special occasion dishes, because of its exorbitant price and cultural significance.

Good For: chili oil or whatever you want to add some heat to

While red pepper flakes, cayenne, and paprika resemble each other in color, they all hit slightly different flavor notes. Red pepper flakes are hot, but not necessarily spicy. They make for a fantastic topping or pasta sauce addition. Try steeping them in hot oil with garlic and ginger for a table hero homemade chili oil.

Cayenne comes from the same peppers, but is slightly hotter with a more pronounced flavor. It’s typically emulsified into broths and stews, or used in dry rubs for protein. As for chili powder, it’s made from a variety of peppers, usually much lower on the Scoville Scale and often smokier in flavor. You can easily sub one for the other, but make sure to scale back on cayenne if using in place of chili powder to avoid making your dish too spicy (yes, it can happen).

Despite its fiery color, paprika isn’t always spicy. It does add a bit more complexity flavor-wise compared to pepper flakes or cayenne, especially when smoked.  You’ll often see it used  for meat rubs or as a topping (deviled eggs, anyone?).

Peppercorns, also known as pre-ground black pepper, are actually dried flowers. Ground pepper though, is merely a shadow of the whole peppercorn. Plop some into a hot pan and follow with all the making of a soup or stew. The flavor difference will be noticeable.

Voila! Whether you’re spring cleaning or spring stocking, your spice drawer just got a needed makeover.

To help with storage 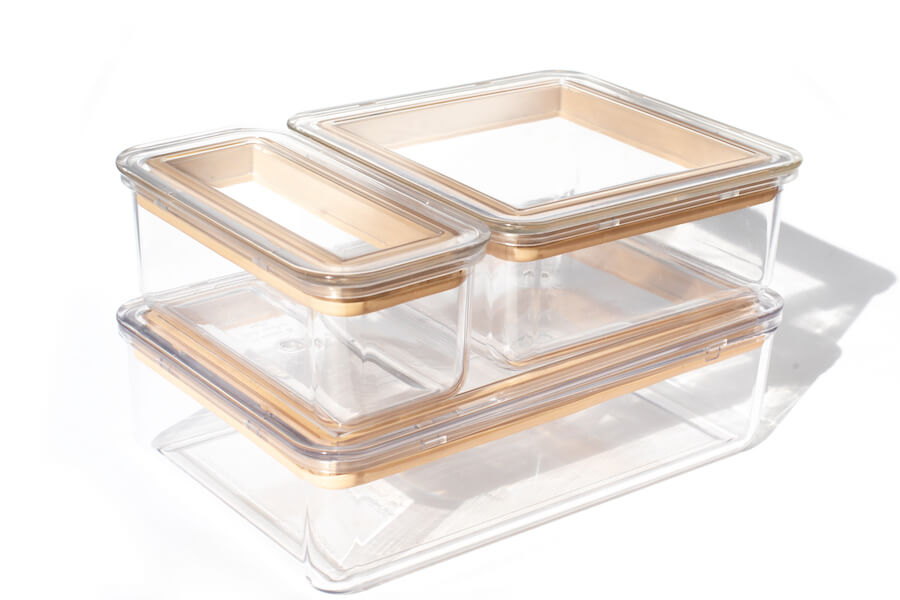 We spoke with Local Roots founder Wen-Jay Ying about her first time on a farm, the broken food system, and the power of food to forge community. What Material Is Best For Food Storage Containers?

We weigh up the pros and cons of the top 4 Food Container materials so you can decide what's best for your lifestyle.