Xotchiltl (so-chill) Vasquez is a consultant at TMC in New York City, traveling the world to provide companies with market research and ways to relate to their consumers. Clad in a floor-length jeans dress from a street market in Japan, we talk packed-school-lunches and how they encouraged a curiosity for food and trying new things.

I grew up in Virginia, outside of DC. That’s where I lived most of my life until I moved to New York about nine years ago for grad school. I’m a market researcher but technically my role is ‘consultant’ because we consult with brands across a range of industries asking a variety of different questions they need answers to.

Some of these companies are big corporate entities and my job is to help them get closer to real people.

Some of these companies are big corporate entities and my job is to help them get closer to real people. They’re paying us to have conversations and come back to them and say, “Here are the most interesting nuggets that you should build your business on." Everyone in my office eats at their desk. It’s totally the norm in New York. No one has second thoughts about it, like, “That’s what you do.” My company would never say anything if I took an hour for lunch but I’d feel guilty because I’m putting pressure on myself to be productive or appear to be productive.

I spend an unsexy amount of time on programs like powerpoint. I have to work on the computer a lot, I spend an unsexy amount of time on programs like powerpoint, haha. But the most exciting thing about my work is definitely going to new places and learning about new cultures and people. Global travel is no small thing to me. I really love it. I was just in Japan for two weeks and going into a lot of people’s homes. What a privilege… What a privilege to go into their homes! I don’t even speak their language.

When I was in Japan, I’d wake up really early because of jet lag and think, well the only thing that’s open is the fish market. So, I went and had tuna don for breakfast… raw fish for breakfast! Or I’d have an egg salad sandwich. No matter where I go, I'm eating whatever is normal there and then I'll bring something back. Usually it’ll be some kind of food or drink, like sake. I also brought back a bunch of weird candies and snacks and mayonnaise. Special mayonnaise. It’s got MSG and it’s sweeter. That’s how you know it’s good. I just spent a month in India for pleasure, not for work. I was all by myself the whole time and I ate a lot of meals alone. But one day, I did a group tour which was really nice because I hadn't been around people in a while. The best part was when they took us to this house in a part of India called Kerala where there’s all these canals. People live off the canals, on houses on stilts above them and it’s basically little villages across all these waterways. We went into one man’s home - he gets paid in exchange for preparing a bunch of home-cooked meals for tourists to enjoy - it wasn’t a beautiful place at all but the food was so simple and so delicious. It was served on a banana leaf, with all these bright colors, like bright pink, bright orange, bright yellow. You ate it with this fermented, delicious rice. It was the most delicious thing.

It was served on a banana leaf, with all these bright colors, like bright pink, bright orange, bright yellow. It was the most delicious thing. I don't think of my food containers as a sustainable choice, I think of eating leftovers as a sustainable choice. A lot of people throw out food that’s perfectly good or let it go bad because they think, I don’t wanna eat the same thing twice! Sustainability takes many forms… or lack of sustainability. Food waste is contributing to ozone depletion and it’s sad that you’re just throwing your food away.

There’s this place two blocks down from work that everyone goes to. It’s very easy, very efficient but they don’t ask you, they always just give you a bunch of napkins, a bunch of cutlery and every person gets their own plastic bag. I get so frustrated when I go in there and I say, “No thank you!” but it disrupts their system. Lunch is relegated and it shouldn’t be. I get to work between one and one and a half hours later because my mornings are for me. I eat my breakfast and I make my coffee. Sadly, lunch isn’t that way. I wish it were.

My mom doesn’t like to cook but there was always all kinds of food around me growing up. My family’s from El Salvador. I didn’t really explore food outside of that for a really long time. I remember going to school and having my lunchbox. I wanted the Lunchables, I wanted the PB&J sandwich but instead, I'd get these super elaborate, El Salvadorian meals. I’d get a pupusa. Kids are looking at you like, what is that?! (If you've never had one, they're f***ing delicious. Everyone should eat them.) They should be as popular as tacos, in my opinion.

I wanted the PB&J sandwich but instead, I'd get these super elaborate, El Salvadorian meals. My family used to make this really good tripe soup, or tongue. It looks gross to other people, not a cute kid food. I’d be like, “Mom! Why don't you make me a PB&J sandwich?” But yesterday, I went to eat tacos at this place upstate and I got tripe. I got tongue. I got all those, what are they called, offal foods? So even though my mom didn’t like to cook, she did expose me to a lot of things. Now I wish my mom was making me food every day.

So even though my mom didn’t like to cook, she did expose me to a lot of things. Now I wish my mom was making me food every day.

Words by Nayla Al-Mamlouk and photography by Elena Mudd

Everything you need for dining al desko. Complete with modular InvisiSeal Food Containers, silverware, a sauce pot, napkins and the bag.
Shop Now 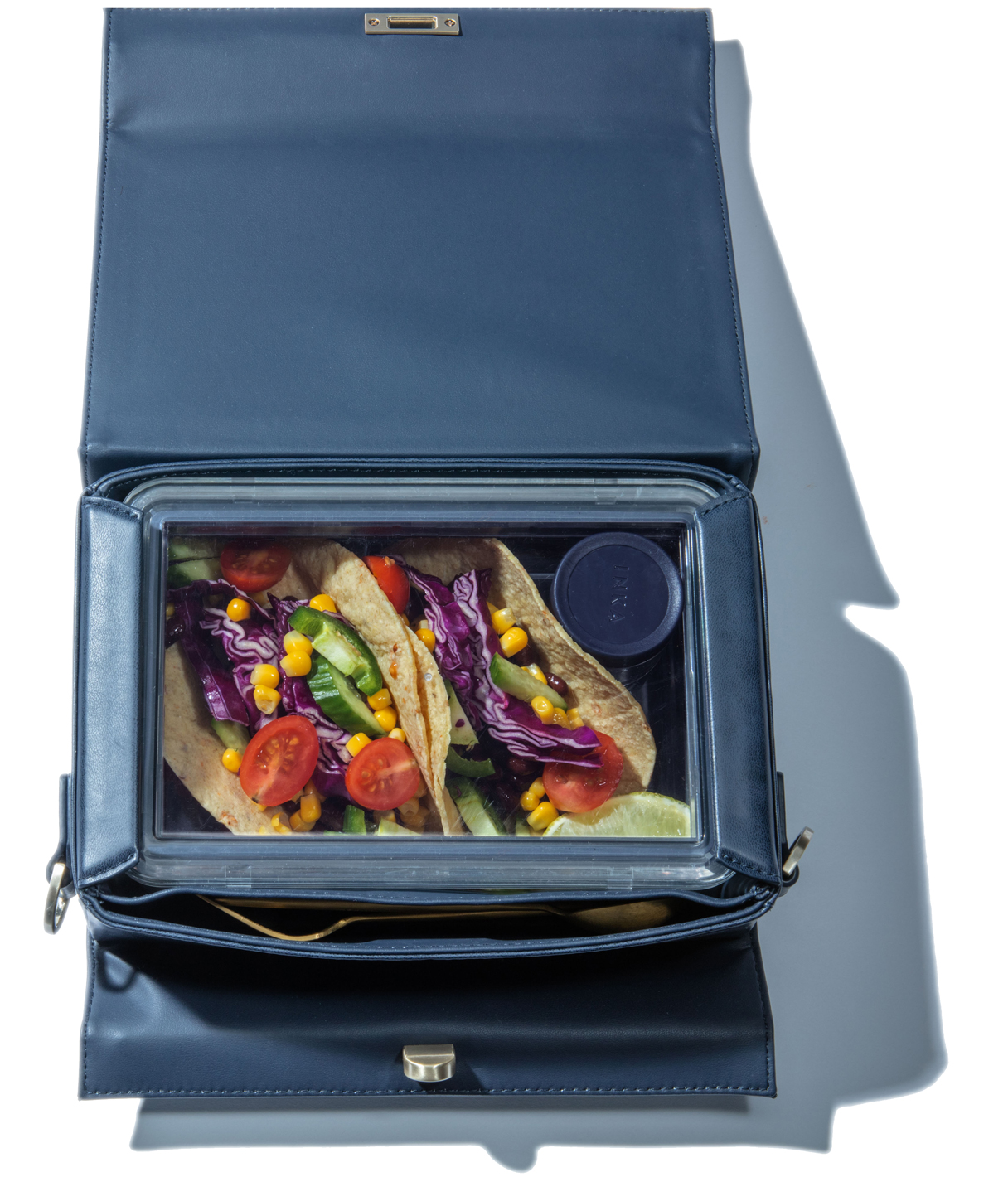