Lani Halliday is the founder and owner of Brutus Bakeshop based out of Brooklyn, NY. A pastry chef and gluten-free baker, her famous Miso Chocolate Chip Cookies are praised by the likes of Yoko Ono and Questlove. Over Zoom, she talks about beginning her career in her 30s, her love of farmer’s markets and the power of a simple cookie.

What I offer aren’t the usual suspects. I think for me, “baking outside the lines” speaks to the messiness of my reality. There’s an archetype of what a pastry chef is and what a business owner is. I just don’t think that’s necessarily me. That’s not how I roll. I’ve taken a long and winding road to get to where I am in my career. I’ve followed my intuition and what’s next is TBD. Who knows what’s next anyway. The whole industry is in jeopardy. “Baking outside the lines” is trial and error. It’s making mistakes.

“Baking outside the lines” is trial and error. It’s making mistakes. One of my favorite recipes, the Thicc Mints, are the Miso Chocolate Chip Cookies that are over-baked, but not burnt, drenched in a vegan mint chocolate ganache.

It really came from getting a very toasty batch. And when they came out, I thought I don’t really wanna throw these away so what can be done? I made this mint and chocolate ganache, that’s one of my favorite combos, and the Thicc Mints were born. Like the girl scout cookies, Thin Mints, but thicc.

It’s funny what a cookie can do. When you’re a gluten-free baker, to develop recipes you have to think in ratios and macronutrients, what ingredients are and what they bring to the table in their different phases. American butter is typically 14% water so if I’m going to switch out to coconut oil, overall in the mix, where’s the water coming from, the acid, the binders? Where’s the flavor coming from? It’s like a microcosm of this dieting principle I have: standing for your vision and not just in it. I’m getting esoteric on a cookie but that’s how I build recipes. You have to bake outside the lines. When you have this gift of an allergy, you get to work around convention and surprise and delight people.

As for the miso chocolate chipper, it isn’t brain surgery or rocket science or curing Corona. But that was my contribution and people love it. It’s my best selling thing.

Yoko Ono said it’s her favorite cookie ever. My cookie touched the same lips that touched John Lennon. That’s cool. I made a cake for Steven Colbert, he’s a personal hero. Questlove, he’s a big fan of mine too. I was like what? My agent sent me this email. She said, “I was talking to Questlove’s people, apparently he’s a big fan of yours.” I’m sorry. Quest… the Questlove. That Questlove is a fan of mine? That’s cool. I think I’m good. I think I could retire. I have done the thing.

I’m originally from all over really. I was born in Honolulu and lived in Hawaii until I was ten. I was raised in a baptist church and every Sunday, we’d have this potluck lunch, which was a sampling of cultures. Even now my mom, who’s a South Brooklyn Italian, makes lumbia - fried Filipino spring roll filled with pork and green onions and stuff - every Christmas because of her years and years being with Filipino folks over in Hawaii. I’d never given it a second thought that most Italian moms don’t make lumbia. My dad’s from the South. Having fried chicken and okra, or lumbia and lasagna and italian subs is how I grew up. That sort of wide range of food experiences is why I love food. My whole work life is centered around food. After high school, I got a job at a hippy grocery store. Like a mini chain to Portland. This store had an organic bakery, a naturopath on staff, it was wild. I was basically working at the front and bagging groceries and then the man who ran the bakery was like, “You my dear, come hang out with me.” He was this fabulous, fantastic baker who taught me everything.

I could create things with just my hands and my brain and some flour, water and salt. That to me was the moment I was hooked.

I had never done anything where I felt like I mattered. Where I felt like my contribution and the things I did when I went to work everyday mattered. Or that I could create things with just my hands and my brain and some flour, water and salt. That to me was the moment I was hooked.

Eventually, I moved to New York and got married. When I had my first kid, I worked at Erin McKenna’s bakery downtown. I was so happy to get that job. Then I didn’t work for six years, and I didn’t have a college degree. I was living overseas with my now ex-husband, having babies. He had a great job that allowed me the privilege to not work. I remember, acutely, when I was in my late 20s and early 30s looking at women I knew who were building their careers. I chose to stay at home. I was so happy about that choice and I love my kids but I was like, what did I do? I’m never going to catch up.

When I left my husband, I realized that I put myself in a position where I wasn’t really taking responsibility for myself mattering, or being as much of a director of my life as I possibly could. I didn’t know what to do. I was at my mom’s, which was a total come-down from the life I’d been living. I spent a lot of time crying and drinking beer and smoking cigarettes.

I spent a lot of time crying and drinking beer and smoking cigarettes. Then my mom was like, “Get it together.” So I did. I went to pastry school.

Then my mom was like, “Get it together.” So I did. I went to pastry school. I found these modalities of being able to create within pastry that really just turned me on. Right after pastry school, I moved back to New York and worked at Ovenly as one of the managers running their cake program.

After Ovenly, I started freelancing. I made cakes for people and it was a word of mouth thing. I kept putting one foot in front of the other and doing things even when I was afraid, even when I didn’t know where it was going to lead. I just needed to trust my intuition and show up. Fear has been my constant companion and I’ve learned to make friends with that psychosomatic panic response. I utilize fear as a tool, as a spiritual playground.

It seems to be paying off. That’s what I mean about letting your resentments or fears, that dark shadowy stuff, inform and guide you. That can be steam to power things. That can be energy. The earth is like you should be eating this right now and I'm like OK, got it.

I like making things that can last for a minute too, like shove all this into a container and take myself to the beach. What’s in season. What’s popping? What’s good? What's grown near here? The earth is like you should be eating this right now and I'm like OK, got it. I don’t always do that, life gets busy. I’m a single mom and I'm not trying to make myself crazy for some ideal.

Being good at lunch is about ta-da-da-da: self-care. I wake up, drink water, have my form of caffeine and then usually, I eat at 11 AM or 12 PM. Really that meal which ends up being lunchy allows me to pause and reflect and recalibrate. When I pack my lunch, my past self has set the intention for the way I’m going to nourish myself.

Today’s lunch is tuna salad with lime pickle, waxed beans and Kewpie mayo and some peaches from the farmers market. The mayo is Japanese with MSG in it. The tuna’s this nice oil packed tuna with some Castelvetrano olives in there. This work has given me a life that I didn’t think I’d be able to have. It’s given me, you know, confidence in my ability to execute. Like damn, you did that. You did that.

I haven’t always walked around and been like, “Damn, you really are a bad bitch.” I do now- haha!

I haven’t always walked around and been like, “Damn, you really are a bad bitch.” I do now- haha! I really am a bad bitch. I really am her. She really is me. But I didn’t always think that, and that came from doing things like remaking a cake and washing dishes until 5 o'clock in the morning.

Maybe I should get an investor and open a retail bakery and call it a day. I think it would do OK. I want to have a shop downstairs and live upstairs. Can the Connecticut Muffin downstairs from me just give me the keys to their spot and I’ll open there?

Everything you need for dining al desko. Complete with modular InvisiSeal Food containers, Silverware, a Sauce Pot, Napkins and the Bag.
Shop Now 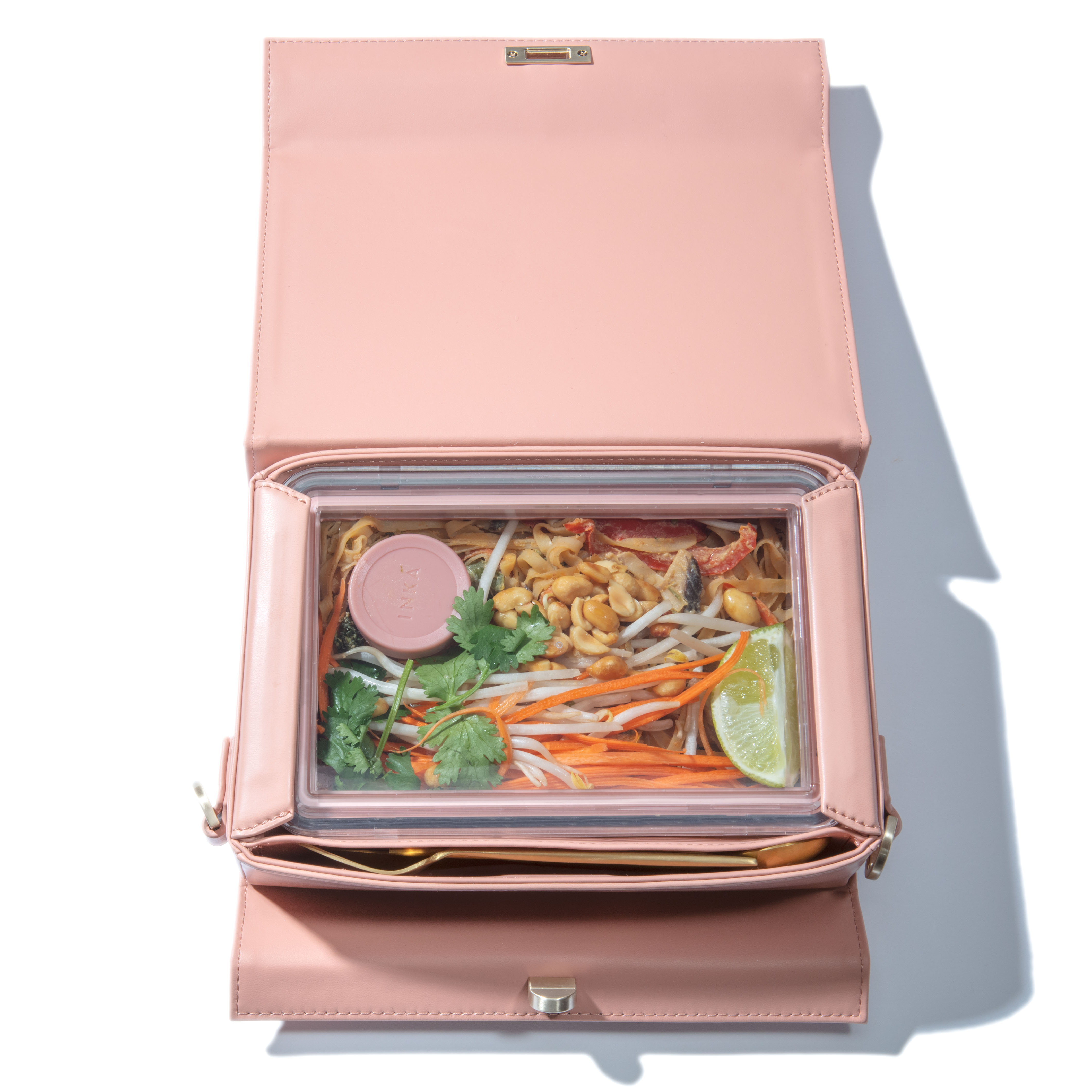