Our research began at the height of the pandemic. Quickly, we realized that the idea of reusable anything was falling out of fashion in the name of hygiene, and disposable chopsticks use spiked to new highs. The irony was that disposables weren’t nearly as sanitary as we’ve all been told. Their wood and bamboo is bleached with sometimes unregulated chemicals, and the porous materials can absorb food, odors, and bacteria.

Hygiene wasn’t our only problem. Our research found that 80 billion disposable chopsticks get tossed annually– leading to the deforestation of more than 25 million trees, mudslides, and global warming. China has even imposed a tax on disposable chopsticks to combat the waste, but the issue is rarely discussed in the US. From our surveys, it became clear respondents were looking for a solution to the disposable ones crowding up their utensil drawer, but didn’t know where to look.

The last problem identified during our research phase was surprising. We heard one grievance after another about how chopsticks get lost, end up dirty at the bottom of a bag, or separated from each other in the cutlery drawer. And much like a missing sock, the singular chopstick would end up on its way to a landfill. That's when we started thinking of ways to keep chopsticks together for easy storage and on-the-go use. First, we tackled the material for the chopsticks themselves. Our research led us to stainless steel - aka the cleanest, non-toxic metal around. The longevity of the material made it inherently more sustainable than mass-produced wooden and bamboo chopsticks. It’s also more hygienic – due to its low-porosity, it doesn't absorb stains and smells (or give you splinters). It also has a higher heat resistance, so cooking and dishwashing are a go.

Once we had that down, we talked shape with our designer. We wanted to give a nod to all the different styles of chopsticks prominent in other countries. We found inspiration for our material from the metal chopsticks prominent in Korea. Like Japanese Chopsticks, ours are on the shorter, rounder, more tapered side. And finally, like Chinese Chopsticks, ours feature a blunt end instead of a pointed one. When it came to designing the holder, we wanted something that would mimic the effect of the paper sleeve often accompanying disposable chopsticks, but more sustainable. This is when our designer had the ingenious idea to make the holder double as a rest for the Chopsticks when not in use. We were sold.

Silicone felt like the obvious choice for material. We’d used it for our Food Containers and Lunch Kit, and loved the ways in which it was used for utensils in Korea and Japan. Now it was on to deciding what that would look like!

Our designer explored 8 different options for the shape (see below).

We then narrowed it down to a final two, and had our local sample shop in New York make prototypes, so we could test them in person with our research group.

We had 20+ people test out the designs. And what we found was that children and people with arthritis had more difficulty removing the chopsticks from the rectangular shapes compared to the circular ones. The circular design was also easier to locate in a full bag (IYKYK). And there you have it!  Our near 2-year journey to bring you chic, sustainable chopsticks. We can’t wait to see how you use them.

Our new and improved

Ditch the drawer full of disposables and meet our stainless steel Chopsticks. They're designed for picking up everything from homemade sushi to flaming hot cheetos. The holder doubles as a rest so your chopsticks sit pretty at a dinner party or stay put for lunch on-the-go.
Shop Now 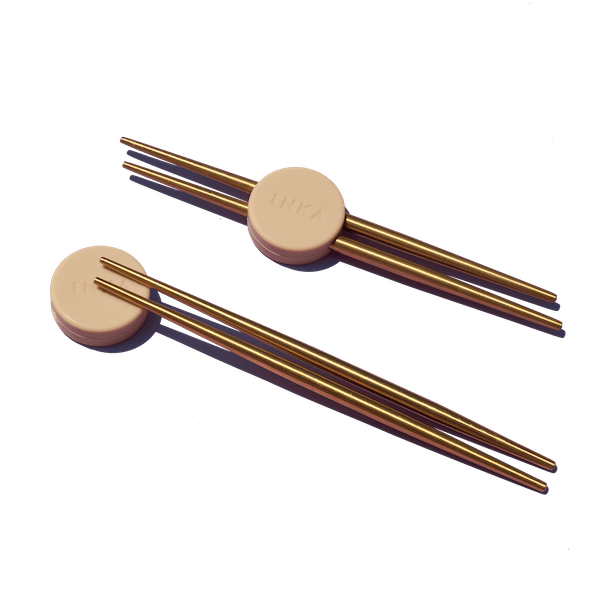